Swedish climate activist Greta Thunberg waves aboard the catamaran La Vagabonde as she sets sail for Europe from Hampton, Va., on Wednesday. 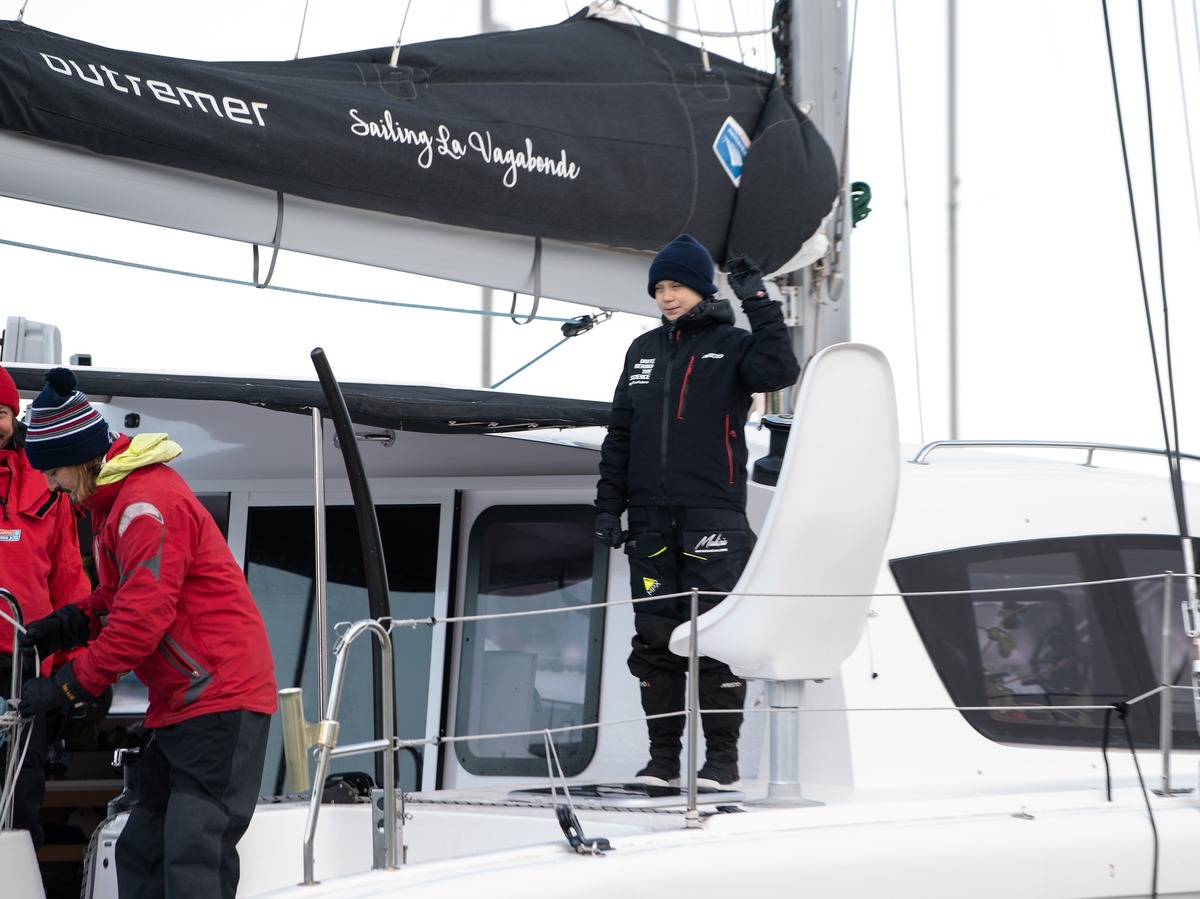 Swedish climate activist Greta Thunberg waves aboard the catamaran La Vagabonde as she sets sail for Europe from Hampton, Va., on Wednesday.

Two and a half months after she arrived in New York Harbor, Greta Thunberg set sail back to Europe.

The 16-year-old Swede’s visit to the U.S. was a barnstorming tour for our time: She had demanded of world leaders at the United Nations, “You all come to us young people for hope. How dare you?” She had marched alongside millions in the Global Climate Strike. She had rallied with thousands of fellow students in places like Iowa City. She had stood with Native American activists at Standing Rock.

And she experienced life in the U.S., a country she says plays an “incredibly important” role in fighting climate change.

“You are such a big country,” she told NPR in September. “In Sweden, when we demand politicians to do something, they say, ‘It doesn’t matter what we do — because just look at the U.S.’

With her steely gaze and unwavering push to make the world’s adults take the necessary steps to avert further climate disaster, Thunberg has touched off a global movement with young people at the forefront.

She is now both celebrity and oracle, ascending to worldwide notice since her first “school strike for climate” in August 2018, when she protested outside Sweden’s parliament instead of going to class.

She had intended to make her way to Chile for the next round of U.N. climate talks, but unrest there spurred the COP25 annual climate conference to move from Santiago to Madrid.

But she couldn’t just get a different flight: Thunberg won’t fly, because of air travel’s outsize emissions. She needed to find a boat going her way.

She put out a request on Twitter: “It turns out I’ve traveled half around the world, the wrong way:) Now I need to find a way to cross the Atlantic in November… If anyone could help me find transport I would be so grateful.”

November isn’t exactly prime sailing season in the North Atlantic, but up popped a reply from an Australian man named Riley Whitelum: “Greta it’s Riley here from Sailing La Vagabonde. If you get in contact with me I’m sure we could organise something.”

Turns out, Whitelum and Elayna Carausu have a catamaran, a baby and a million subscribers following their #boatlife on YouTube.

For the next few weeks, the world’s most famous climate activist will be a part of it.

La Vagabonde is outfitted with solar panels and hydro-generators, so it has a minimal carbon footprint. Thunberg had sailed from Europe to New York on a boat, though unlike that vessel, this catamaran has a toilet.

The voyage is expected to take two to four weeks, and Thunberg hopes to reach Spain in time for the climate conference taking place Dec. 2 to 13. The boat’s location can be tracked online.

As the catamaran set sail Wednesday morning from Hampton, Va., temperatures were in the 30s, and Thunberg and her fellow sailors — including her father, who traveled with her — were bundled against the cold.

Thunberg showed her typical aplomb before taking to the high seas.

“I’m looking forward to it,” she told the AP, “just to be able to get away and recap everything and to just be disconnected.”

She had one more message for Americans: Vote.

“We must realize this is a crisis, and we must do what we can now to spread awareness about this and to put pressure on the people in power,” she told The Guardian. “The U.S. has an election coming up soon, and it’s very important that for everyone who can vote, vote.”