Navy Special Operations Chief Edward Gallagher had his former rank reinstalled less than a week ago. Now he could soon be stripped of his status as a Navy SEAL. 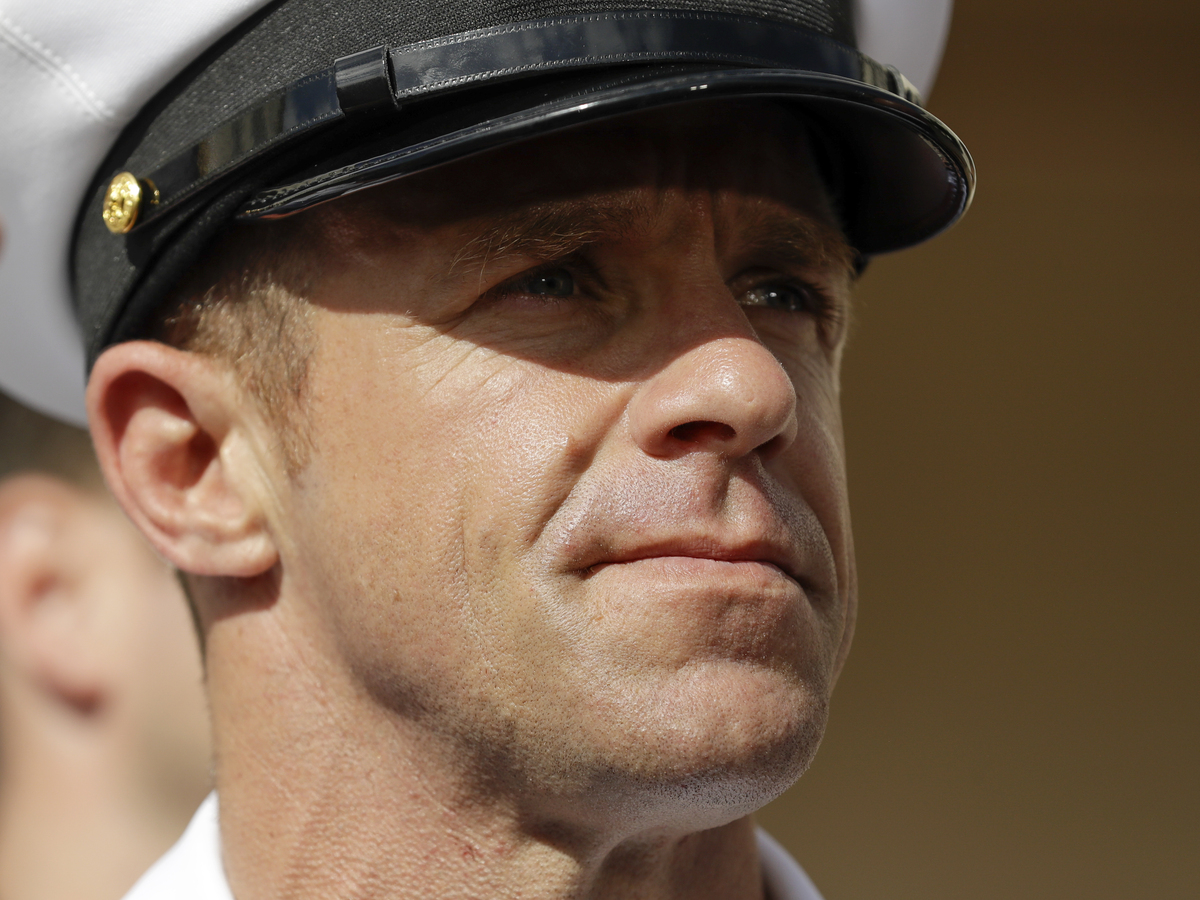 Navy Special Operations Chief Edward Gallagher had his former rank reinstalled less than a week ago. Now he could soon be stripped of his status as a Navy SEAL.

Special Operations Chief Eddie Gallagher may be stripped of his status as a Navy SEAL, potentially setting up a confrontation between the Navy’s top brass and the commander in chief.

On Wednesday, Gallagher and three of his supervising officers were notified that a review board will be convened to determine whether the men should be allowed to remain in the elite SEALs.

In letters sent to Gallagher, Lt. Jacob Portier, Lt. Cmdr. Robert Breisch, and Lt. Thomas MacNeil, the men were told the board will decide whether they “displayed a gross lack of professional or personal judgment, lack of moral or ethical behavior, and/or conduct inconsistent with the SEAL ethos.” If the board finds they committed acts that adversely impact team discipline, it can revoke their authority to wear the Navy SEAL trident on their collar.

In a statement, Capt. Tamara Lawrence, a spokeswoman for Naval Special Warfare, said Commander Rear Adm. Collin Green is responsible for the SEALs, “which includes assessing the suitability of any member of his Force via administrative processes.”

Gallagher, who was accused of killing a wounded ISIS fighter in Iraq, was acquitted of war crimes earlier this year, except for posing with the body of a dead prisoner. He was sentenced to four months of confinement. He was also demoted to a lower rank from chief to petty officer first class.

The ruling vexed President Trump and on Friday, he issued an order to restore Gallagher to the pay grade of E-7. Throughout the trial the president spoke publicly on behalf of Gallagher, whose case was bungled by prosecutors almost from the start.

The same day Navy officials noted the decision in a tweet, saying, “We acknowledge [Trump’s] order and are implementing it.”

If the board’s decision goes against the men, they could ask the president to reverse it, NPR’s Tom Bowman reports.

But the move by Green on Wednesday flies in the face of those orders.

“If there’s further action against Eddie, it’s clearly a sign of insubordination because it’s going against the president’s intent, which is, ‘You guys get your hands off Eddie,’ ” Ed Hiner, a former Navy SEAL told NPR.

Hiner befriended Gallagher during his detention and says he visited the embattled Navy SEAL regularly. He framed Green’s actions as “contempt for the commander in chief and retribution for Eddie Gallagher.”

He also remarked that stripping the men of their gold eagle Trident pins, which designate their standing as Navy SEALs, is the most degrading step officials can take. Especially as Gallagher is set to retire.

“It is the last slap in the face. It means we do not have faith in you to be a special warfare person,” Hiner said.

Others note Green and other high-ranking officials are committed to making an example of Gallager and his supervisors, to convey that misbehavior will not go unpunished, regardless of the president’s protection.

Many veterans were outraged last week following Trump’s order to promote Gallagher to his former status and Trump’s decision to pardon two Army officers accused or convicted of war crimes. The fear is that it may embolden future troops to disregard some of their training.

“It puts us on a par with the enemy. And we can’t allow that,” Retired Lt. Col. Gary Solis told NPR’s Quil Lawrence. “In the future, those who witness war crimes are going to be less apt to report them because they’ve seen what happens.”

NPR obtained a copy of the letter addressed to Portier. In it, officials say he has until Dec. 13 to submit a written statement to Green concerning the possible revocation.

Portier is Gallagher’s former platoon commander. He has been a SEAL since 2012 and was charged with obstruction for failing to report Gallagher’s alleged war crimes up the chain of command. But the charges were dropped.

Ultimately, the review board will make its recommendation to Green who can choose to endorse it before sending up to the Navy’s Personnel Command.

Even if the men were removed from the SEALS they would still be in the Navy.