Emergency medical technician Justine Berry with Susquehanna Township EMS in Harrisburg, Pa., cleans an ambulance with antimicrobial wipes after a patient has been removed. EMS directors say more cleaning supplies and protective equipment will be vital if the coronavirus becomes widespread. 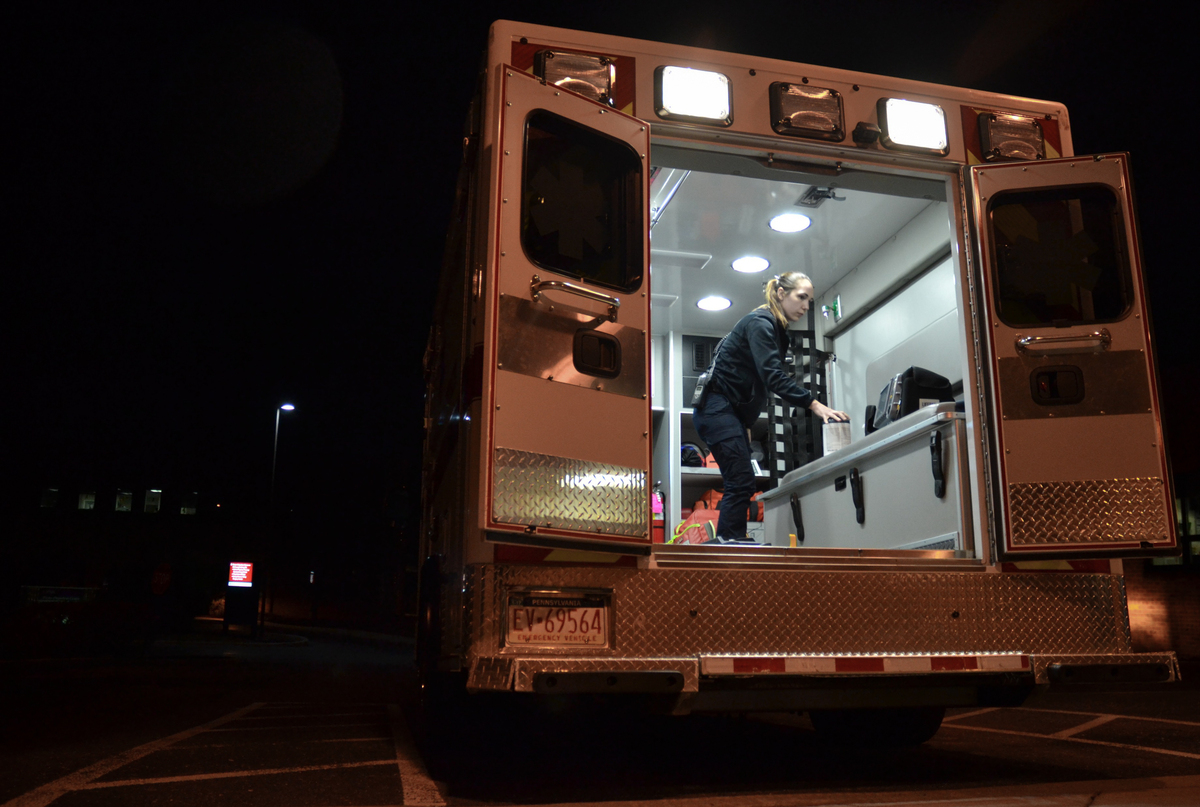 Emergency medical technician Justine Berry with Susquehanna Township EMS in Harrisburg, Pa., cleans an ambulance with antimicrobial wipes after a patient has been removed. EMS directors say more cleaning supplies and protective equipment will be vital if the coronavirus becomes widespread.

In Washington state, local fire and emergency services departments are rehearsing their infectious disease protocols and taking new precautions as 911 calls pour in related to a coronavirus outbreak in the Seattle area. And around the country first responders are bracing themselves for an increase in calls as more states confirm cases of the new virus.

East Pierce Fire & Rescue assistant chief Russ McCallion has devised a checklist for his medics and fire crews to run through when responding to a potential coronavirus patient. His district covers a 150-square mile stretch of Western Washington dotted with housing developments and small towns south of Seattle.

The checklist, he says, reminds his crews to perform “doorway triage” of patients, and helps them decide when to wear protective equipment and even when to use special entryways at the hospital reserved for people in isolation.

“One of the confounding issues for our responders is that flu symptoms and COVID-19 symptoms are very similar,” he says. “We have to maintain that high index of suspicion on every call where the patient presents with fever, coughing and other flu-type symptoms.”

His fire crews are now instructed to initially wait outside when responding to such calls, while only a few medics go inside, suited up in personal protective equipment, like gowns, gloves and masks.

McCallion expects the number of calls to increase as more people are tested and diagnosed in the state. He worries about having enough staff if calls start to go up “exponentially.”

“You’ll see more pressure on the health care system to treat and leave at home, [and] for people to self-monitor their condition rather than going to the hospital,” he says.

His department is ordering fresh supplies of disinfectant and taking more aggressive measures to sanitize ambulances. Many departments in the region are taking similar steps.

“We are gearing up for the worst and trying to stay ahead of it,” says deputy chief Chuck DeSmith with the Renton Regional Fire Authority in Renton, Wash. “It does have a different feel.”

Around the country EMS departments are preparing. One concern they share is a looming shortage of masks. State EMS directors are worried agencies could run out “in the next couple weeks,” says Leslee Stein-Spencer, a program advisor at the National Association of State EMS Officials.

The shortage will have significant consequences, Stein-Spencer says. When workers get sick, it gets harder to keep ambulance services running.

“If it comes to that point, you would look at alternate staffing measures, and you would look at, you know, triaging,” she says. “The sickest patients would come to the hospital and the others would not get an ambulance.”

If cases surge, it may be hard for ambulance companies to get other necessary supplies, says Matt Baily, the director at Susquehanna Township EMS in Harrisburg, Pa.

In recent years, certain supplies have often been rationed, he says.

The federal Food and Drug Administration lists nationwide shortages of more than a dozen drugs that are considered essential for emergency workers to do their jobs, he notes.

With many drugs made in areas already affected by coronavirus, Baily says he’s also bracing for supply chain issues like he saw in 2017, after Hurricane Maria disrupted production at a Puerto Rico facility that makes saline.

Congress has approved more than $8 billion in emergency funding for states. The funds will be used to test people for COVID-19, track those who have gotten sick, and provide things like public awareness campaigns.

However, Baily says money won’t address his need for more employees if they get sick, and money alone won’t fix the shortage of masks.

He’s been fielding calls with everyone from municipal officials to the members of Congress and is developing plans for what to do if someone on his team gets the virus.

“We’re hoping we don’t need anything, but we’re planning as though we’re definitely going to need all of it,” he says.

For one fire department east of Seattle, staff have already been put into isolation because of possible exposure.

More than two dozen first responders discovered they may have been exposed when responding to calls at Life Care Center, a nursing home in Kirkland.

Coronavirus has swept through the facility, sickening many people and even killing some residents.

Evan Hurley, a firefighter with the Kirkland Fire Department says it’s a place his crew already knew well before the outbreak.

“It’s not unusual for us to respond there on a regular basis because they deal with such sick patients,” Hurley says.

Hurley says others from his department had been responding to calls in the days before the outbreak for nonthreatening things like nosebleeds.

“A nosebleed doesn’t require us to be in the same level of protection as, say, somebody who might have ongoing flu symptoms.”

He says only after the fact did his crew learn some of them could have been exposed to a serious respiratory illness.

The firefighters who were possibly exposed are now in isolation, and some have reported flu-like symptoms. Some are concerned they could have put their family members at risk.

Hurley isn’t quarantined, and this week he continued transporting sick patients from Life Care Center to a nearby hospital.

“Believe me we are learning things,” says Dennis Lawson, president of the Washington State Council of Firefighters, which represents about 9,000 first responders.

Lawson says all the steps departments are now taking – from better screening of suspected cases to more communication between ambulances and hospitals – will keep first responders safer.

“You provide the service to the community,” he says. “And you’re really hoping you have done everything you could… so when you go home to your families you’re not taking anything back there to them.”

This story is part of NPR’s partnership with Kaiser Health News, KNXX and WITF.