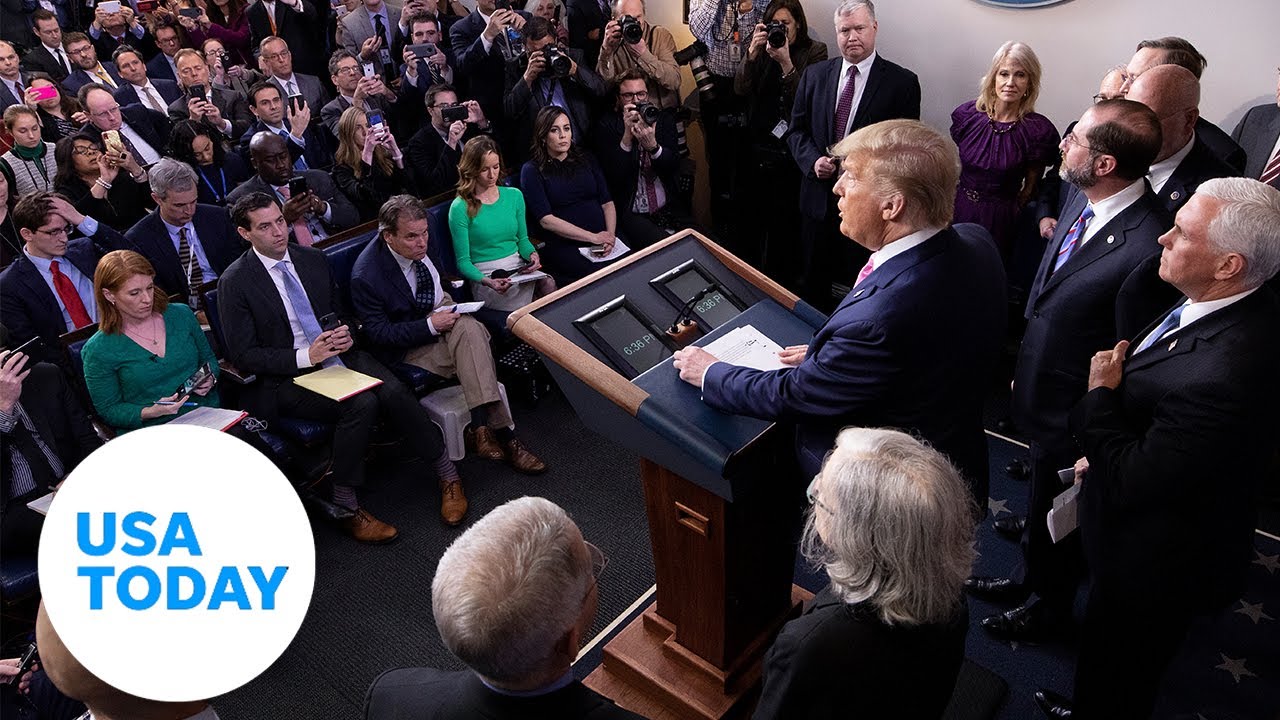 Florida announced Wednesday that it will issue a stay-at-home order, the U.S. coronavirus death toll surpassed 4,500 as more than 200,000 cases have been reported, and public health officials were considering recommending that more Americans wear face masks to combat the pandemic that has brought the global economy to its knees.

“Even if you do wear a mask, it can’t be at the expense of social distancing,” Surgeon General Jerome Adams said. He added that higher-level N95 masks would not be necessary – and could come at the expense of health care workers who need them.

The current U.S. death toll appears to be a tiny fraction of what the nation faces over the next few weeks, public health officials say. Almost 2,000 have already died in New York state alone, prompting New York City to close its parks and open temporary hospitals in a convention center and iconic Central Park.

Our live blog is being updated throughout the day. Refresh for the latest news. More headlines:

• Fact check:Does blood type A make you more likely to get coronavirus?

• Many states are helping renters avoid evictions amid coronavirus crisis. These 12 are not.

• This is what China did to beat the coronavirus.Experts say America couldn’t handle it.

• You want hand sanitizer, cleaning wipes and paper towels. Here’s where you can still get them.

More than 200,000 people in the U.S. have tested positive for the coronavirus as of Wednesday, doubling the number of cases from just five days ago.

Health officials warn that the number of confirmed cases is expected to continue to rise in the coming days as private and public health labs ramp up testing across the nation. More than 1.1 million tests have been completed, Vice President Mike Pence said Tuesday evening.

Most of the confirmed cases are in New York, where more than 83,000 people have tested positive for the virus, including more than 47,000 in New York City, according to the state health department.

Want daily coronavirus updates in your inbox? Sign up for our newsletter

Florida Gov. Ron DeSantis said he would be issuing an order for residents to stay at home for the next 30 days and only leave for essential services. DeSantis  said the order will go into effect Friday at 12:01 a.m.

DeSantis had previously resisted issuing a stay-at-home order but said Wednesday he decided to issue the mandate when President Donald Trump extended the national social distancing guidelines for an additional 30 days.

A study published by the CDC on Wednesday provided more evidence that the coronavirus can spread between people before the infected person knows they’re sick.

Researchers reviewed data for 243 reported COVID-19 cases in Singapore from January 23 to March 16 and found that presymptomatic transmission accounted for about 6.4% of locally acquired cases. The transmission occurred one to three days before patients began experiencing symptoms.

An earlier study in China suggested that 12.6% of transmission was presymptomatic.

Cuomo: NY state to hit ‘apex’ at end of April

New York state’s death toll from the coronavirus continued its sharp ascent with 391 people dying the in latest 24-hour period, New York Gov. Andrew Cuomo said. The virus has killed nearly 2,000 in the state, almost half the U.S. total.

Cuomo also said there were 83,712 confirmed cases as of Wednesday afternoon, an increase of 7,917. Models indicate the apex of the coronavirus outbreak in the state will hit “roughly at the end of April, which means another month of this,” Cuomo said. He added that the model could change over time.

Cuomo showed one projection, from the Gates Foundation, that estimated 93,000 U.S. deaths, including 16,000 in New York state. “What that does say to the rest of the nation is that this is not just New York,” Cuomo said.

CDC to review whether more people should wear face masks

“We’ve learned there’s a fair amount of asymptomatic spread, and so we’ve asked the CDC to take another look at whether or not having more people wear masks will prevent transmission of the disease to other people,” Adams said. The CDC’s current guidance is that sick people should wear masks, but healthy people should not unless they are in contact with COVID-19 patients.

Health officials have said that masks don’t necessarily protect the user from getting the virus, but they prevent the spread to other people.

Dr. Anthony Fauci, head of the National Institute of Allergy and Infectious Diseases, told CNN’s “Coronavirus: Fact vs. Fiction with Dr. Sanjay Gupta” podcast that he supports the public donning masks as long as health care workers are the first priority: “I would lean toward it because, I mean, what harm can it do if you have enough masks?”

Vice President Mike Pence said on CNN that Italy “may be the most comparable area to the United States” in terms of coronavirus mortality rates and cases. He was responding to a question about the administration’s projection that 100,000 to 240,000 Americans could die from COVID-19.

Italy currently has the world’s largest number of coronavirus deaths with more than 13,000, including 837 Tuesday alone, and trails only the U.S. in the number of cases at more than 110,000. However, Italian health officials say they believe the death curve may have peaked.

Pence painted a fairly optimistic outlook when he said, “By sometime in early June, we could well have the coronavirus largely behind us as a nation, and put Americans back to work.”

Though Italy has reported the most coronavirus-related deaths of any country in the world with 13,155, a decline in the daily death rate may suggest that the country’s outbreak is waning.

According to the country’s civil protection agency, Italy reported 727 new deaths Wednesday. That marked a decrease of 110 – or 13.1% – from Tuesday’s figure of 837. Wednesday’s new death figure was the lowest since March 25, when 662 new deaths were reported.

“The curve tells us that we’re at a plateau,” said Silvio Brusaferro, president of the country’s National Health Institute, according to The Guardian. “That doesn’t mean we’ve hit the peak and that it’s over, but that we must start the descent … by applying the measures in force.”

Italy has been under a national lockdown since March 9, and on Wednesday health minister Roberto Speranza said the restrictions would be extended until April 13.

U.S. stocks, fresh off one of the worst quarters in history, fell sharply when the markets opened Wednesday as the Dow dropped more than 800 points. The decline comes a day after the blue-chip index posted its worst first quarter ever.

The Standard & Poor’s 500 also sank Wednesday: 10 of the 11 sectors were lower, led by declines in financial, real estate and utility shares. The losses come as President Donald Trump warned Americans to brace for a “hell of a bad two weeks” ahead.

Said Anwiti Bahuguna, head of multi-asset strategy at Columbia Threadneedle Investments: “What we are experiencing now is the equivalent of putting a patient in a medically induced coma – a calculated, temporary risk with the goal of establishing greater longer-term health.”

In a move that had been signaled strongly over the last week, the All England Club officially canceled Wimbledon for 2020, citing the “likely trajectory” of the coronavirus outbreak in the United Kingdom and the logistical impossibility of setting up the event at a point later in the summer.

It will be the first time Wimbledon hasn’t crowned a champion since the tennis tournament paused from 1940 to 1945 because of World War II.

It’s another way companies are trying to contain mounting losses, along with millions of layoffs and employee furloughs. For workers, those moves put a big dent in family budgets and retirement plans, which are already battered by the stock market’s plunge.

Joy Napier-Joyce, head of the employee benefits practice at the law firm Jackson Lewis, said calls about canceling 401(k) matching ramped up over the past two weeks.

“In anticipation of an economic downturn, employers are looking at the ability to suspend those contributions for this year, or the near future, to help with expenses,” Napier-Joyce said.

The University of California system became the largest and most influential entity to waive its requirement that prospective students entering college in 2021 submit scores from the SAT or ACT standardized tests.

As part of the impact of the coronavirus outbreak, both the ACT and the College Board, which administers the SAT, had delayed or canceled dates for their tests. At this time of year tests are traditionally administered to 11th-grade students at centers across the country that are now closed.

A growing number of colleges have used those cancellations as the impetus to make the tests optional for incoming students, either temporarily or for the foreseeable future. The UC system has been discussing that possibility for some time.

Prince Charles is ‘on the other side’ of his coronavirus diagnosis

Prince Charles, who tested positive last week for COVID-19 after “displaying mild symptoms,” said in a video announcement shared by Clarence House that he is feeling better but will stay in isolation.

“Having recently gone through the process of contracting this coronavirus, luckily with relatively mild symptoms, I now find myself on the other side of the illness but still in no less a state of social distance and general isolation,” Charles said.

The 71-year-old son of Queen Elizabeth II expressed condolences to the sick and the families of those who have died. His wife, Camilla, 72, tested negative for the virus.

For many, rent is due today – and won’t be easy to make

Rent was due Wednesday, the first day of April, for millions of Americans. Rent day comes as a record 3.3 million Americans have filed for unemployment in a crisis that could lead to nearly 50 million people losing their jobs. The federal government took a big step toward protecting renters by issuing a 120-day moratorium on evictions from federally subsidized housing or from a property with a federally backed mortgage loan. And a USA TODAY analysis shows that at least 34 states have issued broader moratoriums on evictions.

“I will be able to pay my April rent, but I don’t know about May or June,” said Phoenix resident Ada Obinway.

Navy working with Guam governor to isolate sick US sailors

Sailors who have tested negative for the coronavirus from the virus-stricken aircraft carrier USS Theodore Roosevelt will be quarantined, many off-base in Guam hotels, as soon as possible, authorities said. Gov. Lou Leon Guerrero said Wednesday that military personnel already stationed on Guam would act as a buffer between the quarantined sailors and civilians. Dozens of the ship’s 5,000 sailors have tested positive, and the close quarters make social distancing impossible.

“We can protect Guam while being humane to them,” she said. “That is the Guam I know, and we will not abandon who we are out of fear.”

President Donald Trump says he is going to speak with Florida Gov. Ron DeSantis about whether to allow two Holland America cruise ships to dock in his state. One of the ships has four dead passengers and 200 other passengers and crew with flu-like symptoms. Trump never explicitly said what he plans to tell DeSantis, who has raised concerns about medical resources that might be needed for Floridians.