Former Vice President Joe Biden at a press conference in Wilmington, Del., in mid-March. His bid this week to allow 60-year-olds to get Medicare “reflects the reality,” he says, “that, even after the current crisis ends, older Americans are likely to find it difficult to secure jobs.” 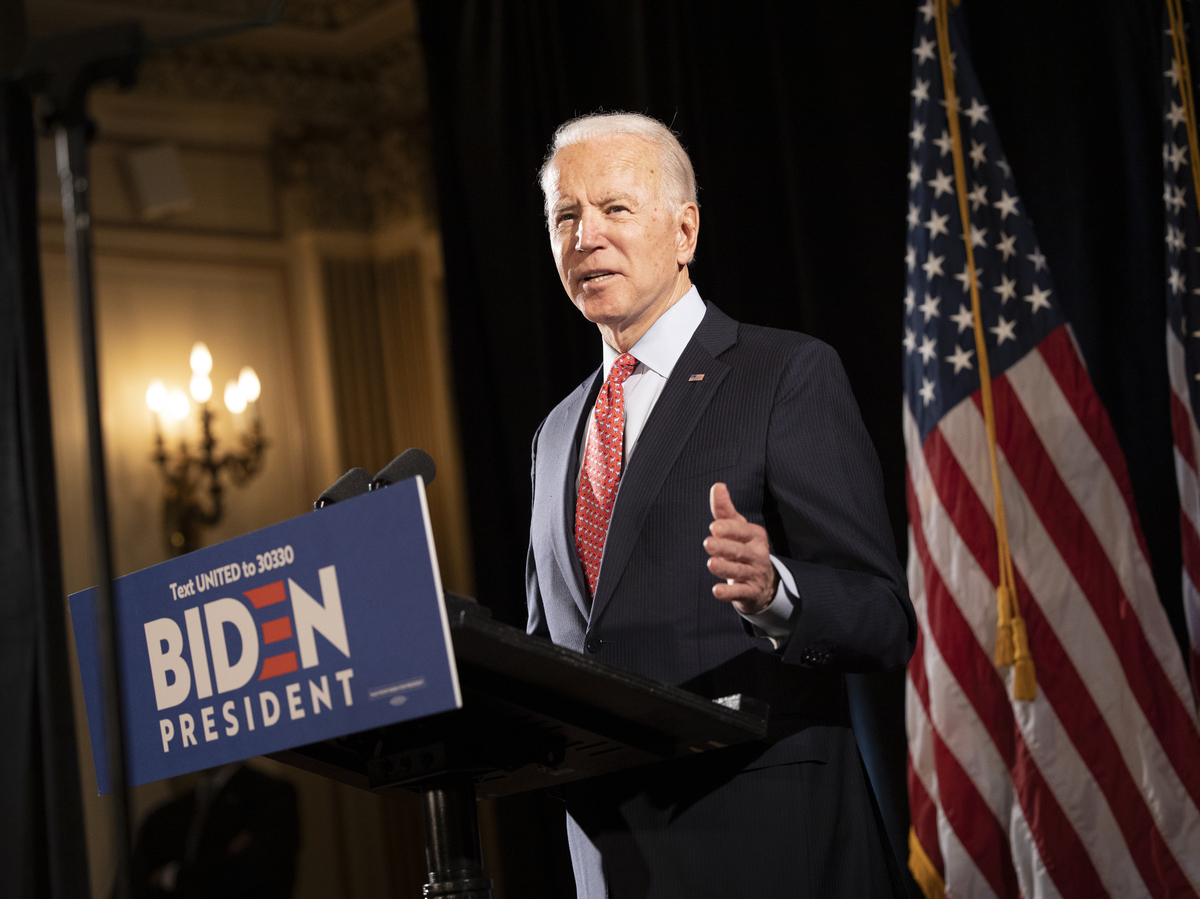 Former Vice President Joe Biden at a press conference in Wilmington, Del., in mid-March. His bid this week to allow 60-year-olds to get Medicare “reflects the reality,” he says, “that, even after the current crisis ends, older Americans are likely to find it difficult to secure jobs.”

In one of his first proposals since becoming the presumptive Democratic presidential nominee, Joe Biden is wading back into the roiling waters of health policy.

In a nod to the effects of COVID-19 on the economy, and in what is clearly an overture to supporters of the “Medicare for All” plan pushed by Vermont Sen. Bernie Sanders, Biden wants to lower the age of eligibility for Medicare from 65 to 60.

“It reflects the reality that, even after the current crisis ends, older Americans are likely to find it difficult to secure jobs,” the former vice president wrote this week in a post on the website Medium. Details on the plan are few, but Biden made clear that Americans aged 60 to 64 who have employer health coverage could keep it if they wanted to, or could join Medicare. Biden writes:

“Under this concept, Americans would have access, if they choose, to Medicare when they turn 60, instead of when they turn 65. Medicare benefits would be provided to them as they are to current Medicare recipients. This would make Medicare available to a set of Americans who work hard and retire before they turn 65, or who would prefer to leave their employer plans, the public option, or other plans they access through the Affordable Care Act before they retire.”

In addition, he says, “the Biden Medicare-like public option — as well as other subsidized private plans available to individuals through the Affordable Care Act — would remain available.”

Some people think Biden’s new proposal doesn’t go far enough. RoseAnn DeMoro, former head of the National Nurses United union and a longtime Medicare for All supporter tweeted: “Now if he will only erase the 60, we have #Medicareforall.” The Physicians for a National Health Program, which also favors a Medicare for All plan agreed: “Why the unnecessary 6?” implying that Biden should lower the eligibility age to 0.

But just as Biden’s earlier “public option” health proposal from last summer seemed incremental compared with more liberal candidates’ plans to uproot the nation’s health care system in its entirety, this proposal by the former vice president is also more significant than it seems.

Since it was a thousand news cycles ago, let’s review what Biden proposed in July. That blueprint would uncap federal subsidies for plans purchased through the Affordable Care Act’s marketplaces, so that no one would be required to pay more than 8.5% of their income toward health insurance premiums. It would also create a comprehensive new “public option” health insurance program that anyone could purchase, including those who don’t like or can’t afford what their employer offers.

At first glance, Biden’s latest plan (which was coupled with a student loan forgiveness plan aimed at younger voters) seems much like many other proposals that surfaced during the Democratic presidential campaign to let people younger than 65 avail themselves of the popular Medicare program by “buying in” to it or a similar program.

But this is not at all the same thing. Even though it would be optional, “it literally means you’re in Medicare at 60,” says Rodney Whitlock, a health care consultant and former GOP congressional aide.

Such a plan would also be far simpler to implement. Most of the previous proposals call for people not to enroll in Medicare itself, but rather a parallel, Medicare-like plan run by the federal government.

“The proposals in Congress are totally different,” says Tricia Neuman, who heads the Medicare policy program for the Kaiser Family Foundation. “This is so much easier,” Neuman says. (Kaiser Health News is an editorially independent program of KFF.)

Easier to implement, maybe, but Biden’s latest proposal is also likely to be more controversial. While the few available details pledge that federal funding would come from regular tax revenues rather than from the dwindling Medicare trust fund, Republicans are still likely to oppose such a plan ― strenuously.

“Republicans are all about long-term [Medicare] solvency,” Whitlock says. In fact, in recent years, Republicans have pushed to raise the eligibility age to 67, to match the new Social Security threshold being phased in.

When analysts first started looking at the impact of changing Medicare’s eligibility age, they thought that lowering it would help both the Medicare and private insurance risk pools. That’s because the 60- to 64-year-olds would become the youngest, and likely healthiest, members of the Medicare pool. Conversely, they are currently the oldest, and presumably sickest, members of the pool for individual market insurance.

But that view has changed over the past few years. A 2019 study by the Rand Corp evaluated the consequences of allowing even younger Americans to buy into Medicare. The Rand study found that while people ages 50 to 64 would themselves likely pay less under a buy-in program, that doesn’t necessarily translate to savings for the pool of people who buy their own coverage on the individual market.

“When older adults leave the market, insurers are left with a smaller pool of younger, less healthy, and relatively expensive people (given their age), leading to higher premiums,” the study found.

Still, Whitlock says, Biden’s latest proposal could disrupt GOP efforts to oppose Medicare for All. Right now, he says, the crux of their argument is that expanding Medicare to everyone would threaten the viability of the popular program for those who are now enrolled in it. But “only doing it for a targeted group will complicate Republicans’ message,” he says.

Kaiser Health News is a nonprofit, editorially independent program of the Kaiser Family Foundation that is not affiliated with Kaiser Permanente.