Members of the Royal Canadian Mounted Police (RCMP) tactical unit confer after the suspect in a deadly shooting rampage was killed at a gas station in Nova Scotia, Canada, on Sunday. 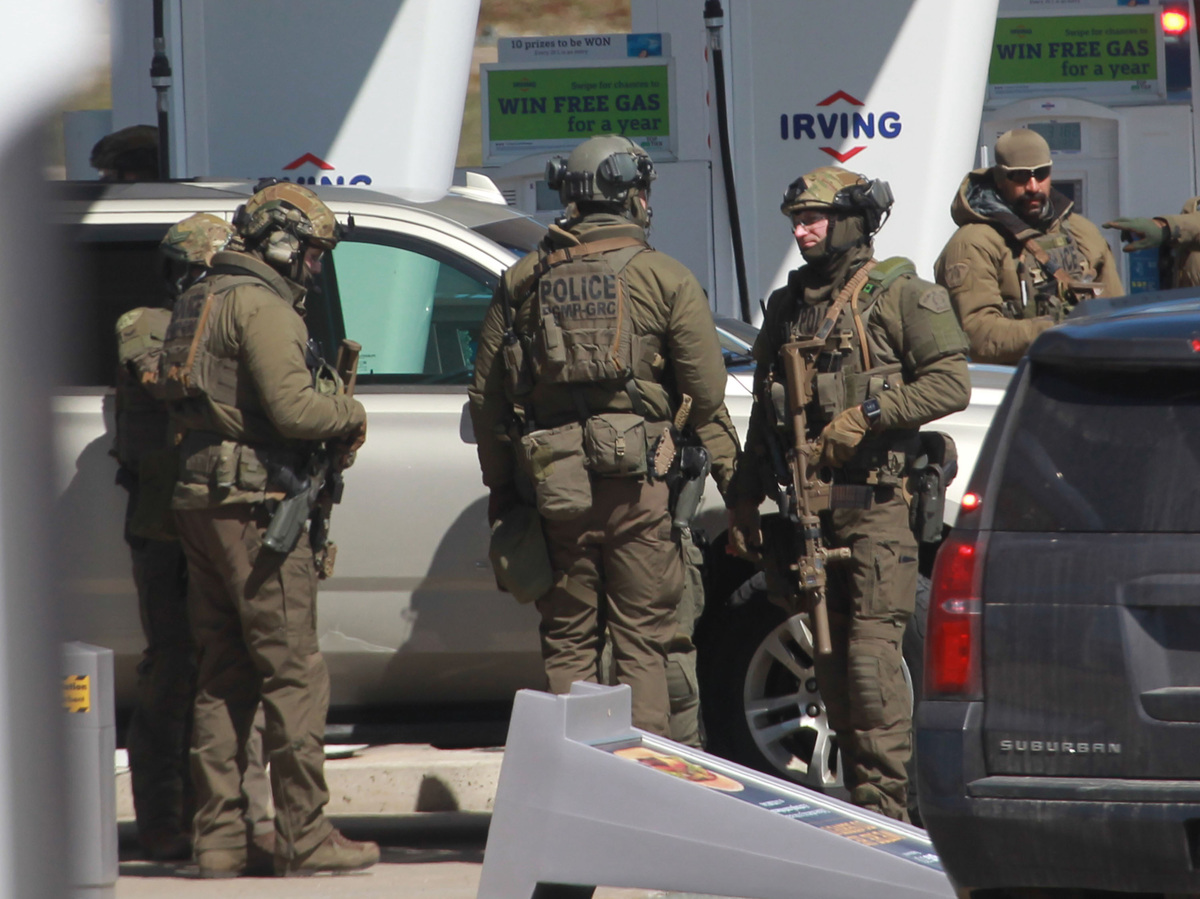 Members of the Royal Canadian Mounted Police (RCMP) tactical unit confer after the suspect in a deadly shooting rampage was killed at a gas station in Nova Scotia, Canada, on Sunday.

At least 10 people, including a police officer, are dead following a 12-hour shooting rampage in Nova Scotia, according to Canadian authorities. The suspected shooter is also dead.

The Royal Canadian Mountain Police (RCMP) identified the alleged gunman as Gabriel Wortman, 51. They believe he acted alone, leading police on a chase across the northern part of the Canadian province that began Saturday and came to an end on Sunday morning.

RCMP identified the deceased officer as Constable Heidi Stevenson, who had been with the force for 23 years. Another officer is receiving treatment after he was injured, but is expected to recover, authorities said.

“The impact of this incident will extend from one end of this province to the other,” said Lee Bergerman, assistant commissioner of the Nova Scotia RCMP, in a statement. “As Nova Scotians, we have to do what we are known for. And come together in times of need and support one another.”

The shooting began Saturday night in the small rural community of Portapique, where police responded to reports of gunfire. The chase ended around 11:40 a.m. local time on Sunday outside of a gas station in the community of Enfield, the RCMP confirmed.

During a news conference Sunday, RCMP Chief Superintendent Chris Leather said police arrived to a “chaotic scene,” describing “several casualties” both inside and outside of a residence.

At one point, officials said, the suspect dressed in what appeared to be a police uniform. They also saw him driving a car with the likeness of an RCMP police cruiser.

Leather says there was at least one incident during the evening in which police exchanged gunfire with the suspect.

“There are several locations across the province where persons have been killed,” he said without giving additional details. He added that there may be more victims police have not located yet.

Canadian Prime Minister Justin Trudeau extended his condolences to the people affected by the shooting.

“To the Portapique community, we’re keeping all of you in our thoughts,” he said on Twitter. “And on behalf of all Canadians, I want you to know that we’re here for you – and we’ll be here for you in the days and weeks ahead.”

In a Sunday afternoon address, Nova Scotia Premier Stephen McNeil called the shootings “one of the most senseless acts of violence in our province’s history.”

“To the families of the victims, and to those who are still feeling afraid, my heart goes out to you. Know that all Nova Scotians are with you,” McNeil said.

In Canada, which has tighter gun ownership restrictions than the U.S., mass shootings are relatively uncommon. This weekend’s killings are thought to be the nation’s deadliest since 1989, when a gunman in Quebec killed 14 women after opening fire at a college.

This is a developing story. Some things that get reported by the media will later turn out to be wrong. We will focus on reports from police officials and other authorities, credible news outlets and reporters who are at the scene. We will update as the situation develops.