A man in a mask walks past a mural on the side of a building in New York City in April. 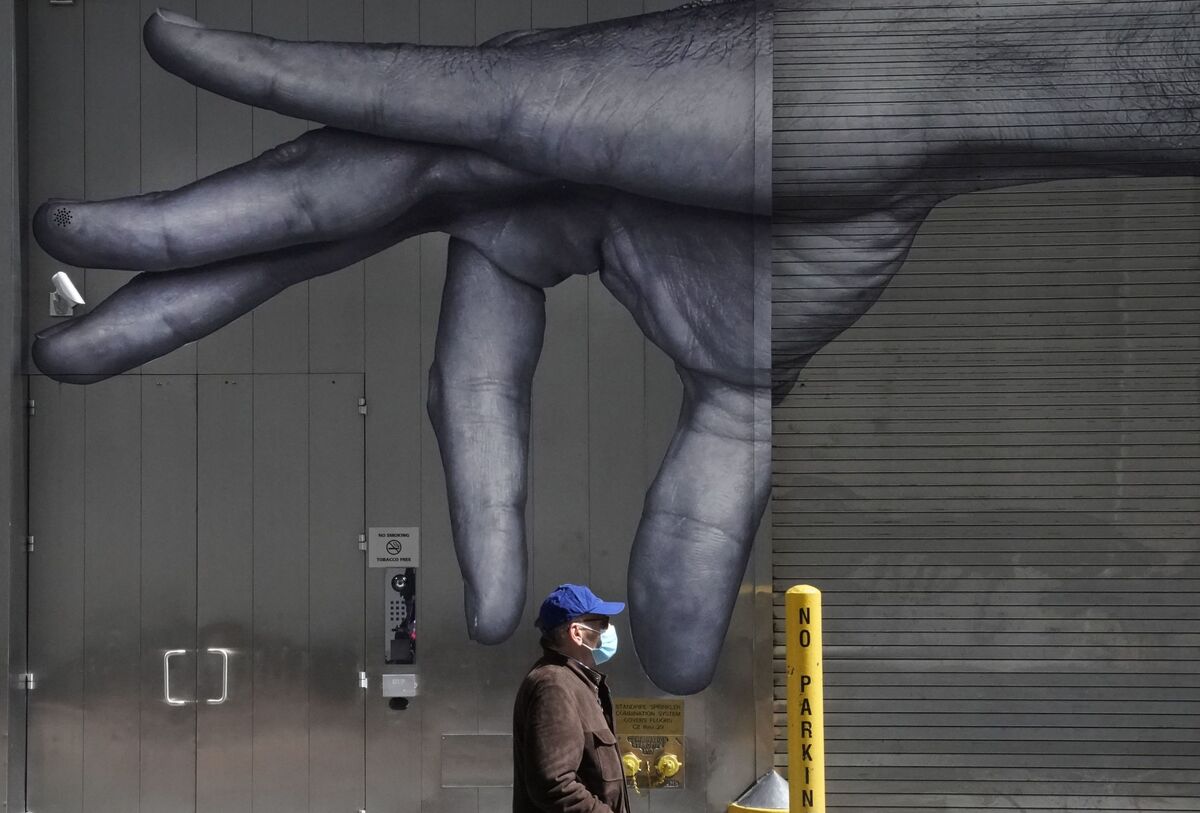 A man in a mask walks past a mural on the side of a building in New York City in April.

Mask wearing has become a topic of fierce debate in the United States.

People opposed to mask mandates have staged protests, and one local health official in Orange County, Calif., quit her job after receiving a death threat for a mask order. Not long after, California Gov. Gavin Newsom ordered Californians to wear face coverings in public.

Meanwhile in Texas, Gov. Greg Abbott recently allowed some counties to impose mask mandates on businesses, despite an earlier order forbidding penalties on individuals for not wearing masks.

While politicians spar over the topic, a growing number of scientific studies support the idea that masks are a critical tool in curbing the spread of the coronavirus.

Take, for example, a meta-analysis of 172 studies that looked at various interventions to prevent the transmission of COVID-19, SARS and MERS from an infected person to people close to them. The analysis, which was published in The Lancet on June 1, found that mask wearing significantly reduces the risk of viral transmission.

“What this evidence supports is that, if there is a policy around using face masks in place, it does actually come with a fairly large effect,” says study co-author Holger Schünemann, an epidemiologist at McMaster University.

Now, most of the studies in the analysis looked at face mask use in health care, not community, settings. And they were observational, not the gold standard of science, a randomized controlled trial, which would be “very unethical in a pandemic,” says Jeffrey Shaman, an epidemiologist at Columbia University. Still, he says the fact that there is a benefit from masks is clear.

“I personally think that face masks are a key component of the non-pharmaceutical arsenal we have to combat COVID-19,” says Shaman.

It’s understandable if some people remain skeptical, since, at the beginning of the pandemic, public health officials in the U.S. said the general public didn’t need masks. But that changed as it became clear that infected people can spread the coronavirus before they even show symptoms of COVID-19 or even if they never show symptoms.

Researchers emphasize there are two main reasons to wear masks. There’s some evidence of protection for the wearer, but the stronger evidence is that masks protect others from catching an infection from the person wearing the mask. And infected people can spread the virus just by talking.

“If you’re talking, when things are coming out of your mouth, they’re coming out fast,” says Linsey Marr, a researcher at Virginia Tech who studies the airborne transmission of viruses. “They’re going to slam into the cloth mask. I think even a low-quality mask can block a lot of those droplets.”

Marr points to a study published in Nature Medicine in April that looked at people infected with the flu and seasonal coronaviruses. It found that even loose-fitting surgical masks blocked almost all the contagious droplets the wearers breathed out and even also some infectious aerosols — tiny particles that can linger in the air.

Other recent studies offer indirect evidence for universal mask use, even if worn by people who are feeling healthy. One study, published in late May in BMJ, looked at people in households in Beijing where one person was confirmed to have COVID-19. At the time, explains study co-author Raina MacIntyre, research was already showing that the majority of transmission of the virus was happening inside households, and China already had a culture of mask wearing. The study found that in households where everyone was wearing a face mask indoors as a precaution before they knew anyone who lived there was sick, the risk of transmission was cut by 79%.

“The more people that were wearing a mask, the more protective it was,” says MacIntyre, head of the biosecurity program at the Kirby Institute at the University of New South Wales in Australia. In other words, when everyone wore a mask, it protected the whole household.

Another study, published last week in the journal Cell, suggests that the coronavirus may first establish itself in the nasal cavity, before sometimes moving down to the lungs to cause more serious damage. If that’s the case, the authors conclude, the findings “argue for the widespread use of masks” to prevent the virus from exiting an infected nose or entering an uninfected one.

And a modeling study, published last week in the Proceedings of the Royal Society A, concluded that if the majority of a population wore face masks in public — even just homemade ones — that this could dramatically reduce transmission of the virus and help prevent future waves of the pandemic. (Remember, we’re still in the first wave in the U.S.)

N95 particulate respirator masks (left) block at least 95% of small airborne particulates in the air. However, they are still in short supply and should be reserved for medical workers. Surgical face masks (right) are most effective at protecting others from the wearer’s droplets. 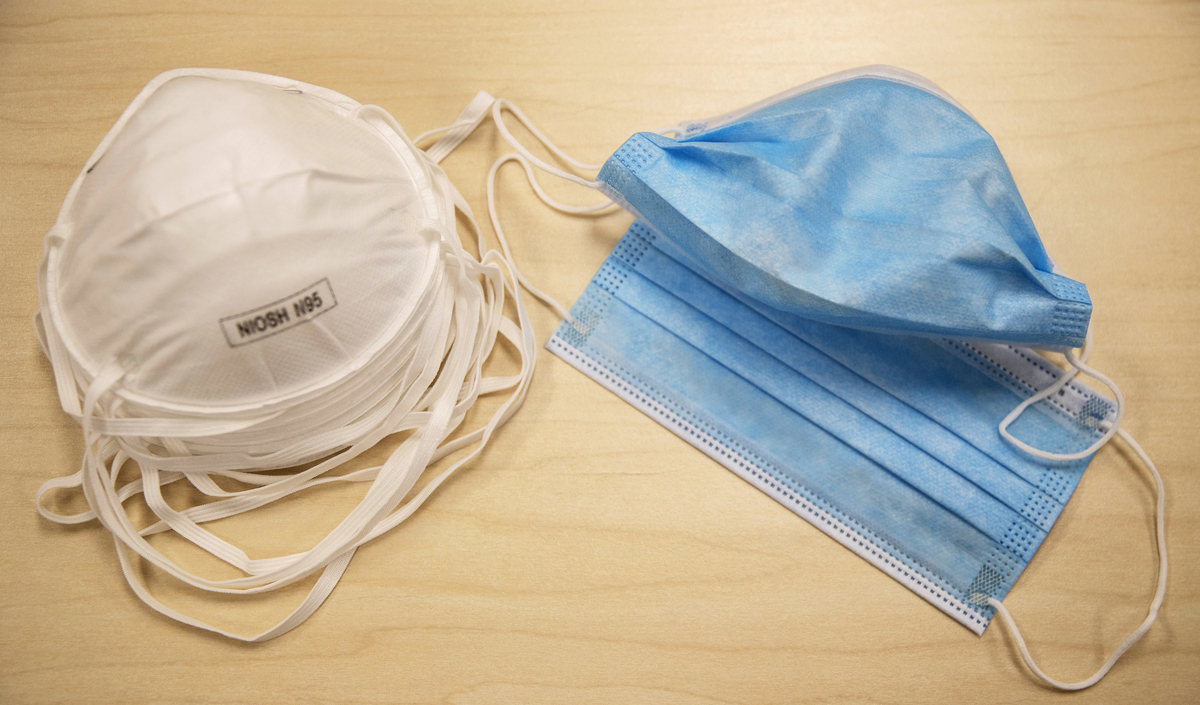 N95 particulate respirator masks (left) block at least 95% of small airborne particulates in the air. However, they are still in short supply and should be reserved for medical workers. Surgical face masks (right) are most effective at protecting others from the wearer’s droplets.

Researchers will tell you that masks won’t provide foolproof protection. And teasing out the science of masks will take time. But Marr says there’s enough evidence already to say that, combined with measures like social distancing, masks really do help.

“From what I’ve seen, I would be comfortable sending my kids back to school if everyone’s wearing masks and they’re staying as far apart as possible,” Marr says.

Of course, how much protection a mask provides — both to the wearers and to the people around them — depends on the type of mask and whether you are wearing it properly. (Note: It has to cover your nose as well as your mouth.) N95 respirators are designed to fit tightly around the nose and mouth so that the air you breathe has to go through the mask; when worn correctly, they block at least 95% of small airborne particles. N95 masks protect both the wearer and other people, but they’re still in short supply and should be reserved for health care workers and emergency responders.

Surgical masks are designed to protect people from the wearer. Because they fit loosely, the wearer can still breathe in unfiltered air from the sides. Even so, surgical masks provide some benefit to the wearer as well: Laboratory testing has found that surgical masks block out 75% of respiratory-droplet-size particles.

As for cloth masks, the protection depends on what they’re made out of and how well they fit. But with the right combination of materials, you can create a cloth mask that offers protection to the wearer in the 30% to 50% range or more, says May Chu, an epidemiologist at the Colorado School of Public Health who co-authored a paper published on June 2 in Nano Letters on the filtration efficiency of household mask materials. That’s far from foolproof protection, but combined with social distancing and hand-washing, she says, it’s certainly better than nothing.

“I think we need a combination of [masks,] distancing, avoiding crowds, avoiding poorly ventilated spaces,” says Marr. Even if each of those individual measures is only partially effective, she says, “by the time you add them all on top of each other, you can achieve better numbers for reduction of transmission.”

This month, the real world provided anecdotal evidence to back that assessment: The head of the local health department in Springfield, Mo., reported that after two hair stylists tested positive for the coronavirus, none of the 140 clients and six co-workers potentially exposed came down with COVID-19. As The Washington Post reports, officials said the two hair stylists wore cloth masks. According to a statement from the health department in Springfield, the salon also had other policies in place, such as distancing salon chairs and staggering appointments.