Jamie Dimon, chairman and chief executive of JPMorgan Chase, said in his 2021 letter to shareholders that waves of technological innovation are becoming faster and the  science behind them increasingly complex as technology, such as artificial intelligence, is “embedded” in more products.

He said: “In today’s world, I cannot overemphasize the importance of implementing new technology.”

In the midst of a pandemic, war in Ukraine, inflation, and other challenges, Jamie Dimon discusses navigating geopolitical events, America’s competitiveness, energy security, sustainability, and an inclusive economy in his annual letter.

The bank announced in January this year that total expenses would increase by approximately $6bn, with $2.5bn mostly related to people, travel and entertainment reflecting higher inflation and increasing competition for labor.

Dimon wrote: “This year, we announced that the expenses related to investments would increase from $11.5bn to $15bn. I am going to try to describe the “incremental investments” of $3.5bn, though I can’t review them all (and for competitive reasons I wouldn’t). But we hope a few examples will give you comfort in our decision-making process.”

The Financial Times recently reported that the bank had been criticised by some investors for not providing enough detail about its technology spending.

Dimon’s letter continued that some technology investments must be made to sustain the company’s health, such as meeting regulatory requirements and improvements for cybersecurity, as well as operational resiliency and security; others are needed to maintain competitive position such as digital account opening; specific improvements are needed for products and services as well as forward-looking research and development.

“First, on the path to new and modern infrastructure, cloud-based systems, whether private or public, will ultimately be faster, cheaper, more flexible and also AI-enabled — all extremely valuable features,” said Dimon.

The bank has spent $2.2bn building cloud-based data centers and thousands of applications, and their related databases, are being changed to run in the private and public cloud environment.

“We migrated our card mainframe to the new data center and are already seeing approximately 20% faster response times for our major customer-facing applications,” added Dimon. “This one application will use only 1.5% of the capacity of our new data centers: Of our more than 5,000 applications that will still be in use in two years, 40% will have been replatformed.”

Spending on infrastructure will include modernizing developer tools and embedding operational resiliency and cybersecurity controls as well as building software for new products and services. Dimon wrote that decentralized finance (DeFI) and blockchain are real, new technologies that can be deployed in both a public and private fashion.

“We use a blockchain network called Link to enable banks to share complex information, and we also use a blockchain to move tokenized U.S. dollar deposits with JPM Coin,” added Dimon. “We believe there are many uses where a blockchain can replace or improve contracts, data ownership and other enhancements; for some purposes, however, it is currently too expensive or too slow to be deployed.”

In addition, the bank is spending hundreds of millions of dollars each year on artificial intelligence. For example, AI is used to generate insights on existing and prospective clients from public information, such as know your customer protocols, regulatory filings, social media, news, public websites and documents.

For example, since 2017 the bank has spent about $100m on AI, machine learning and other technology initiatives to improve fraud risk systems. Annual fraud losses have fallen 14% despite volumes rising almost 50%, with an estimated $100m in annual savings.

“We are working on several research-based projects that have the potential for significant future impact,” said Dimon. “These involve multi-agent simulation, synthetic data and encryption methods — elements that have the capacity to unlock new ways of trading, managing risk and assessing productivity.”

Jeroen Plag, global head of corporate strategy and innovation at ING,  said the Dutch bank is looking at tokenizing assets in order to increase capital velocity of its balance sheet. 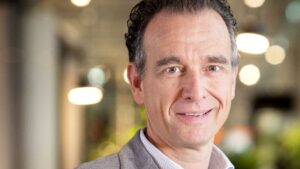 Plag told Markets Media: “We are looking at tokenisation to split up loans into smaller pieces so that we can increase the velocity of trading and the capital velocity of our balance sheet.”

The bank is also assessing the capabilities and opportunities for digital assets and aspects such as DeFI, central bank digital currencies and stablecoins, and crypto assets. Plag added: “Obviously there is a challenge because of the lack of regulation.”

Plag had been head of corporate strategy and took on the additional role as chief innovation officer following the departure of Annerie Vreugdenhil last year. He had already  been working closely with ING Neo, the bank’s innovation division, and strategic activities including the Innovation Fund and ING Ventures, in positioning the bank in five value spaces – housing, lending, trades, financial health, and compliance.

He continued that there is a lot of overlap between strategy and innovation. In addition, corporate strategy hires external strategy consultants who can help the innovation business.

“They bring their toolbox into the company and their way of problem solving, peeling the onion and then defining the strategic business case is that clearly a skill is complementary when we build new ideas and ventures,” Plag added.

Once an opportunity has been identified, innovation can involve building internally via ING Labs, partnering with a fintech which already has a solution in the market or investing through the venture fund.

“Anything that we focus on needs to improve the customer experience,” he said. “Other goals are to create assets that can generate fees and businesses that are capable of standing on their own feet.”

The Fnality Payment System, which enables wholesale payments in real time with near instant settlement in central bank money-backed digital cash, is due to launch in 2022. In February three UK fintechs, NatWest and Santander completed the first cross-chain pilot debt transaction on public Ethereum and Fnality Payment System.

In addition, sustainability which includes environmental, social and governance concerns has become an increasingly important topic. Plag added: “We have the Terra approach, where we have identified goals that the sectors have to set in order to reach the Paris climate goals.”

ING is developing a data repository where companies can store all their sustainability data and also developing a green mortgage product.

Bitcoin fell along with Ether and all other top 10 non-stablecoin cryptocurrencies in Tuesday morning trading in Asia, wiping out...

Learn about the great support BNB Chain has given Mr. Lightspeed and why that has been crucial to building on...

Advisers to the Russian government have recommended a ban on crypto mining in residential areas of the country. The main...