Week in Insights: Asserting Your Independence And Moving Ahead

This weekend, Americans all over the world will unfurl flags and march in parades in honor of Independence Day. Others will spread blankets to watch fireworks. And still, others will eat—and drink—a lot to commemorate the day.

But what does the day really mean? When I was a kid, July 4 was easily explained. It was the day we declared our independence from Great Britain. From there, I assumed we skipped right to democracy. It wasn’t until I got older that I realized it was much more complicated—and involved tax.

The part we all know is this: On July 4, 1776, representatives for the colonists officially approved the Declaration of Independence, an announcement that the colonies had voted to officially break away from King George III and Great Britain.

Only it wasn’t as simple as having 56 colonists sign a piece of paper. The British had ruled the colonies since the early 17th century. The colonies weren’t their only concern—they had also taken over parts of Canada, the Caribbean, and South America.

Occasionally, in the quest to keep its empire intact, the British fought other countries. One of those conflicts escalated into the Seven Years’ War, better known in the US as the French and Indian War. When the war ended in 1763, France was forced to turn over all of mainland North America east of the Mississippi River—other than New Orleans—as well as Grenada, Saint Vincent, Dominica, and Tobago, and other lands owned in India or the East Indies. Spain also turned over Florida to the British.

On paper, it was a win. But war—and ruling the world—can be expensive. The king decided that he could refill his coffers by relying on the Americas. There was just one problem with this plan: He underestimated how the colonists would react.

The first attempt at raising revenue was the Stamp Act of 1765. The act required that materials printed and used in the colonies, like magazines and newspapers, be produced on stamped paper and embossed with revenue stamps. The revenue stamp indicated that a tax had been paid. The colonists weren’t happy, and the act was repealed the following year.

Next up: the Townshend Acts of 1767. The acts imposed taxes on imports of paper, paint, lead, glass, and tea—things the British thought would be difficult for the colonists to make on their own. The idea was to try a system of indirect taxes instead of a direct tax—only it wasn’t received any better, and the acts were partially repealed three years later.

Eventually, the Tea Act was instituted, retaining the duty on imported tea. It also gave the East India Tea Company a tax break and trade advantage, cutting out the ability of the colonists to do business on their terms. The response? The colonists stopped British ships from making deliveries to Philadelphia and New York. But they couldn’t stop the ships headed for Boston. Over three hours, more than one hundred colonists snuck onboard and dumped out 45 tons of tea—what we now call the Boston Tea Party.

As punishment, the King enacted the Coercive Acts. But mostly, it just made the colonists angry. And in 1774, dozens of them dumped more tea into the harbor.

The final version of the American Declaration of Independence, with the signatures of the 56 Congress members.

Even though the Revolutionary War would rage on for a few more years, and we wouldn’t adopt the Constitution some time after that, we celebrate July 4 as the start of US independence. Nearly a quarter of a millennium later, our “new” government is still standing. That’s pretty impressive.

And it didn’t happen in a day, a few weeks, or even a few years. It took time. But the colonists pressed on because it was important.

I think about that a lot in the course of our country’s history, how over the years, we keep trying to be better—to form a more perfect union. And we don’t always get it right. We’ve been reminded of that a lot in the last few weeks.

But to move forward, you often need to be reminded of where you’ve been. That’s really what we’re celebrating this weekend. I hope you enjoy the holiday weekend.

Hot dogs are synonymous with July 4 picnics—even though more beef is purchased than hot dogs in anticipation of the weekend. How many hot dogs are consumed on July 4?
Answer at the bottom. 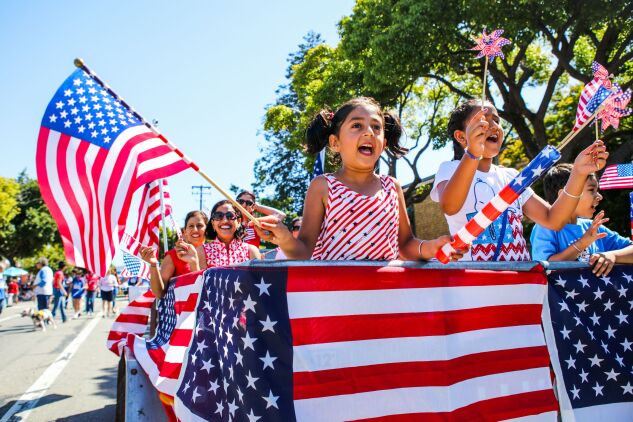 People wave American flags as they ride through 4th of July Parade in Alameda, California on Monday, July 4, 2016.

Our experts touched on various topics, from statute of limitations issues to crypto losses. For a look at what’s making news, here’s our roundup.

Any transition time is a great time to initiate family financial conversations. Advisers can help their clients and those young grads get comfortable asking the right financial questions at this time in their lives, says Capital Group’s Leslie Geller.

Edmund Paul and Anton Zuccaro of Colt Technology Services consider some of the significant issues facing in-house tax professionals and explore how to navigate an increasingly complex international landscape.

Ecuador has recently introduced new taxes and reforms, including the expansion of electronic invoicing. Diego Andrés Almeida and Dayana Naranjo of Almeida Guzmán & Asociados discuss the measures with potential impact on the economy and in the context of demands for economic reforms from indigenous groups across the country.

Benjamin Craig of Ayming UK looks at the UK government’s plans to reform the research and development funding scheme, suggesting flaws in the plans and providing a view on how they might be improved.

The W-4 withholding is an easily overlooked part of the tax planning process. Jody Padar, head of tax at April, looks at the importance of properly calculating W-4 withholding.

Tax-exempt organizations that license their names, logos, and other intellectual property to raise money must be careful when marketing and promoting their vendor’s for-profit products or services since this can present significant tax risks, says Pillsbury’s Robert Logan.

US taxpayers who have lost money on their digital asset investments may be able to deduct tax losses. Fried Frank’s Libin Zhang looks at the different types of losses that can be deducted.

Non-fungible tokens (NFTs) are seen by some as volatile and maybe even short-lived. Michael Kasdan, partner in the intellectual property group of Wiggin and Dana, looks at some risks tied to ownership and cryptocurrency but explains why NFTs are here to stay. 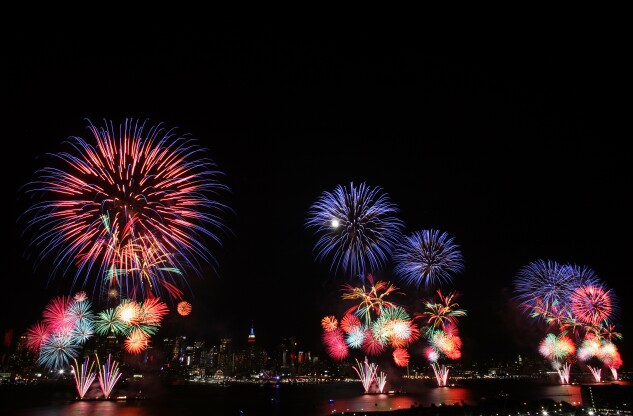 The New York City skyline is seen in the distance as fireworks explode over the Hudson River during the Macy’s fireworks display July 4, 2009 in Weehawken, New Jersey.

Small accounting firms come with their own challenges, but unlike with big firms, continued growth isn’t always a primary objective. Shaynaco LLC’s Shayna Chapman looks at the benefits of being a small firm in terms of control, flexibility, and culture.

President Joe Biden should make good on his promise to fight inflation by lifting tariffs on Chinese imports to end the trade war once and for all, says Alex Durante of the Tax Foundation.

It may be obvious, but you shouldn’t use funds from a nonprofit, tax-exempt organization as a personal piggy bank. In this edition of “A Closer Look,” Berliner, Corcoran & Rowe LLP’s Keith Rosten looks at recent IRS scrutiny of excess-benefit cases for nonprofits and private inurement.

At The Exchange, we welcome responses from our readers and encourage diversity and civil discussion. We are especially interested in responses that add to the conversation, or introduce a different point of view. If you have a response to one of our published Insights, we’d love to hear from you.

The IRS is finally making more amended returns available for taxpayers to file electronically. But even if it’s easier to file an amended return, should you?

An estimated 1.7 trillion barrels of oil are left to be extracted from the world’s resources—that works out to dry wells around 2067. If a gas tax regime is to continue to fund the projects the existing regime funds and internalize only the monetary, the tax must be no less than $2 per gallon, says columnist Andrew Leahey. 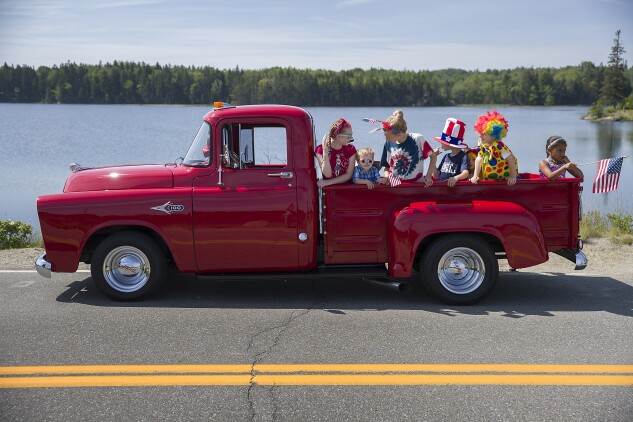 Children sit in the back of a classic truck as they await the start of the 4th of July parade through downtown on July 04, 2019 in Deer Isle, Maine.

Democrats remain interested in ways to expand the current $7,500 tax credit for electric vehicles (EVs). The credit begins phasing out at 200,000 vehicles sold per manufacturer; automakers such as General Motors, which has sold over 200,000 EVs, and Toyota, which is approaching that total, are lobbying Congress to remove the cap.

On this episode of Talking Tax, Ellen Hughes-Cromwick, a senior resident fellow for climate and energy at the think tank Third Way, spoke with Bloomberg Tax reporter Kaustuv Basu about the electric vehicle landscape, the tax credit, and other related policies.

It’s been a busy week in tax news from state capitals to Washington. Here are some stories you might have missed from our Bloomberg Tax news team.
*Note: Your Bloomberg Tax login will be required to access Tax News.

Our Spotlight series highlights the careers and lives of tax professionals across the globe. This week’s Spotlight is on attorney John Hackney, a shareholder at Chamberlain Hrdlicka in Atlanta. Hackney represents individuals, small businesses, and large corporate clients in disputes with the IRS and other taxing authorities.

Baker McKenzie has added 15 tax partners, along with 116 total new partners, according to the firm.

RKL LLP has added three new managers across the tax services and audit services groups in Pennsylvania, according to the firm.

The firm announced that Norton Rose Fulbright has appointed London partner Dominic Stuttaford as the global head of tax.

Evonne Zhiyun Chen has been named tax partner in Mazars’ Los Angeles office, according to the firm.

According to the firm, tax attorney Daniel Soleimani has joined Butzel Long as a shareholder in the Troy, Mich., office.

Nick Peterson has joined Steptoe after serving as a law clerk at the US Tax Court in Washington, D.C., according to the firm.

Pete Palumbo has joined Greensfelder, Hemker & Gale, P.C. as counsel in its trusts and estates practice group, according to the firm.

If you are changing jobs or being promoted, let us know. You can email your submission to TaxMoves@bloombergindustry.com for consideration. 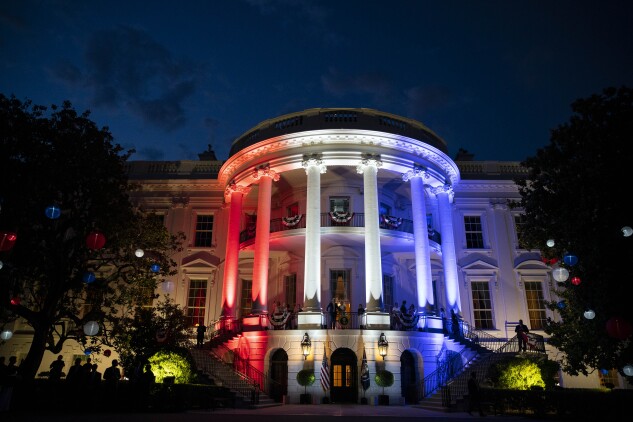 U.S. President Joe Biden and First Lady Jill Biden watch a fireworks display from the second-floor balcony of the Executive Residence of the White House during a Fourth of July event on the South Lawn in Washington, D.C., U.S., on Sunday, July 4, 2021.

According to WalletHub, each year, 150 million hot dogs are consumed on the holiday—that’s roughly enough for each individual taxpayer!

We also have a LinkedIn group with over 300 members where you can share tax-related stories and exchange ideas. We hope you’ll join the conversation!

What Did You Think?

Your feedback and suggestions are important to us, so don’t hesitate to reach out on social or email me directly at kerb@bloombergindustry.com.

Good morning.The Fed’s modest rate increase yesterday has sparked hopes that the U.S. can get inflation back to 2% without...