Why Doesn’t Nvidia Want to Talk About Cryptocurrency Miners?

Nvidia (NVDA 5.38%) reported first-quarter results on Wednesday. The designer of graphics processors (GPUs) and other semiconductors for high-performance number crunching rose above the Street’s targets across the board but also issued modest guidance for the second quarter.

Nvidia’s management spent plenty of column inches and earnings call airtime on topics such as Chinese coronavirus lockdowns, the lack of sales to Russia, and the rising revenue from data center products. However, they barely mentioned an issue that strikes me as a massive threat to the gaming-division’s results. Cryptocurrency mining was swept under the proverbial rug, continuing a long-running policy that could be dangerous for Nvidia’s investors.

Nvidia shareholders may be in for a painful surprise in 2022. Image source: Getty Images.

The prepared commentary from CFO Colette Kress focused on the limited visibility Nvidia has into actual crypto-mining usage of its graphics processors.

The incredible mining horsepower in specially designed processors has made Bitcoin mining economically unworkable, so GPU-based crypto mining has moved on to platforms using a different mining algorithm. Ethereum (ETH 2.68%) is reportedly the most popular crypto network for miners relying on GPUs, and Nvidia’s high-end graphics cards are more cost-effective for this purpose than arch-rival AMD‘s (AMD 3.55%).

Hence, it’s safe to say that plenty of Nvidia GPUs that are marketed as gaming products are being put to use in Ethereum-mining rigs, instead. When there’s a money-making opportunity on the line, enthusiast communities form around the profitable activity and snap up the necessary equipment any way they can.

It should also be noted that there are ways around Nvidia’s efforts to reduce the crypto-mining power of its gaming products.

Why investors should care

Financial evidence shows that Nvidia is making a fortune selling GPUs to Ethereum miners. Let’s hit rewind and go back about five years.

You might recall a spike in cryptocurrency prices in the fall of 2017. The skyrocketing coin prices soon subsided, but the event inspired many enthusiasts to try their hands at cryptocurrency mining. The amount of computing power being used to mine Ethereum surged and stayed high throughout 2018, followed by a sharp drop when a quick rebound in Ethereum prices didn’t materialize.

Nvidia’s trailing revenues were closely tied to the rise and fall in Ethereum-mining efforts that year: 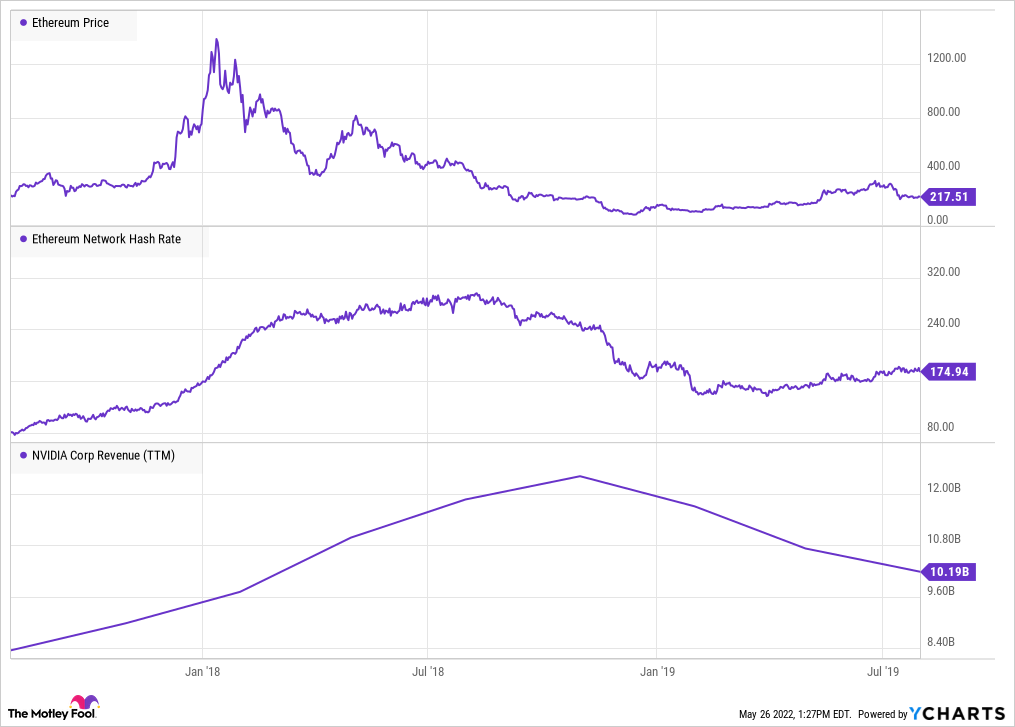 Since then, Nvidia’s management has taken herculean efforts to distance the company from the volatile cryptocurrency market. When the management team discusses this topic with investors, it’s only to claim that the company barely notices the ups and downs of the crypto market anymore and that the sector is too unpredictable for any serious discussion, anyway.

A massive change is coming up

Nvidia has several years of experience with this tactic nowadays (and so does AMD, by the way), but the issue is coming to a point. Ethereum is in the midst of switching its transaction ledger from the mining-based Proof-of-Work (PoW) architecture to the ownership-based Proof-of-Stake (PoS) design. A preliminary version of the PoS system is already up and running, with a test run scheduled in June. The full-featured switch is currently slated to fall somewhere between August and October.

This is a big deal. When Ethereum developers finally flip the switch, there will be no need to mine Ethereum tokens anymore. There are other GPU-friendly cryptocurrencies on the market, but they’re nowhere near as profitable as the Ethereum system.

In short, Ethereum’s technology upgrade will show exactly how much of Nvidia’s robust gaming-product sales really went to gamers and how much has been redirected to the crypto-mining opportunity in recent years.

Nvidia closes the books on the second quarter at the end of July, so the next earnings report won’t tell us anything new. But when the third-quarter update comes around, the company will run out of places to hide the business impact of GPU sales in the Ethereum-mining community.

Given how close to the vest the company keeps this data, I expect an earthshaking surprise to the downside. Owning Nvidia shares (or AMD) when that bombshell drops may be bad for your stock portfolio’s health.

Hut 8 and US Bitcoin announce merger of equals to create a ...  PR Newswire

The bigger the economy, the bumpier it gets – POLITICO

Fed Board Prohibits Member Banks from Holding Cryptoassets as … – Blockworks